In this article, show you the best method to rip and copy DVDs for playing on Xbox 360 or Xbox One easily.

As we know, Xbox 360 and its successor Xbox One are hot video game consoles. Well, more than a console, Xbox One/Xbox 360 can also playback DVDs, stream video over the Internet for sharing. The point here is, Xbox 360/One cannot, by itself, convert your movies from DVD disc and save them to its internal hard drive. The possible solution is to use a DVD ripping tool to rip DVD to Xbox One/Xbox 360 playable video and use a portable flash drive to transfer it to the Xbox for playback.

Though there are many Blu-ray rippers for Xbox console, the best and most suitable among them is Brorsoft DVD Ripper (read the review). This DVD Ripping program offers specified video formats for Xbox 360 and many other game hardware like PSP, PS4/PS3, PS Vita, Wii and more. With it, you can easily convert, edit, view and save all your DVD disc in a format that can be easily played on Xbox 360, Xbox One with the highest possible playback in HD video quality.

If you’re using a Mac, simply turn to Brorsoft DVD Ripper for Mac, which allows you to copy DVD movies to Xbox game console on Mac(including macOS Sierra). Download this converter now and follow the guide below to encode DVD movies to Xbox 360/Xbox One acceptable format.

Note that the guide below uses DVD Ripper for Mac screenshots. The way to finish your task on Windows is almost the same. Just make sure you’ve downloaded the right version.

First, insert your DVDs into DVD Drive, and then drag the DVD files to the program; Or you can get to “File” Menu, click “Load DVD” to draw into DVD movies you want to rip. DVD folder and ISO image files are supported as well. 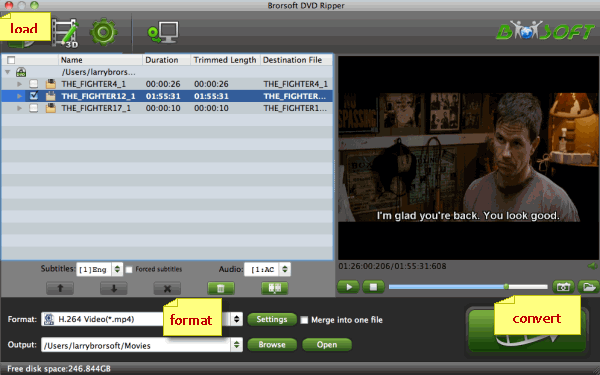 Tip: If you are not satisfied with the presets, you can click “Settings” to change the video encoder, resolution, frame rate, etc. as you wish.

After all necessary settings, you can just click the “Convert” button to start converting your DVD movies to Xbox One, Xbox 360. After the conversion, click Open to get the output files for your Xbox. From now on, enjoy movie with your family!

I share some of my experience in these following pages: